“I’m definitely a ‘life is a journey’ kind of guy,” says Thomas Wages, and his is one that’s taken him from a senior brand manager at Turner to record label founder to advertising agency exec and fashion designer. The latest leg has him joining the team at THRIVE in the role of Chief Operating Officer and applying both his diverse range of experience and go-getting gallantry to our growing enterprise.

“It’s a beautiful combination of the digital and physical world,” he says to describe the work at THRIVE noting how the realm of product development and innovation isn’t all that different from the one he’s been in for the past 5 years, leading his eponymous fashion label; “We have a brick-and-mortar retail space with tactile products, and we also have a huge digital component,” Wages explains. Call it serendipitous: “Thomas Wages” the store happens to be located right across the street from the THRIVE office. While Wages had first met THRIVE’s Jonathan Dalton and Trent Kahute through mutual acquaintance years prior, frequent run-ins and casual talk of working together eventually led to more serious conversations and an official title as COO.

It’s a position Thomas has held previously. Before the fashion brand (but after Turner and the record label — more on those later), Wages partnered with friends to start digital marketing agency Look-Listen. But all these titles and job descriptions — while impressive on their own — don’t really do the man justice. In person, he exudes what’s easily pegged as a Southern charm; a little bigger-than-life but utterly approachable, with an affable accent, refined style and lighthearted demeanor that’s oh-so-charming.  Similarly, as Wages tells tales of his childhood and career, the stories sound somehow both theatrical and down-to-earth, all at once. Like the one about how he got his start at Turner.

Born in Athens, Georgia, and raised near Lake Lanier, Wages earned his maritime license right after graduating college (a BA in advertising and marketing from the University of Georgia which he later augmented with a Master’s degree in photography and design). One night while ferrying guests to a dinner cruise hosted by Turner Broadcasting, he and one of the guests got to talking. The gentleman (an exec at the media giant) gave Wages his card and asked Thomas to send him a resume. What you don’t know (yet) about Wages is that he’s always ready for the next challenge…and just happened to carry copies in his captain’s bag. He handed it to the man on the spot. “He smiled,” Wages remembers. “Folded it up and put it in his jacket pocket.” Needless to say, the young captain began working for CNN in their sales and marketing department soon after.

That first job at CNN led to a string of opportunity with the Turner network, first on the launch team for the newly minted Cartoon Network; then to TNT, where Wages helped brand and launch Turner Classic Movies, before deciding to jump ship and create something for himself — a record label.

“I decided at 28 and with zero experience to open up a record label, and luckily it worked out!” he says with a laugh. Called Blue Dot Music, the first artist he signed was Jennifer Nettles (now the lead vocalist of country duo Sugarland). The second? John Mayer. “We shot his whole album art for ‘Inside Wants Out’ with an instant camera at 4:30 in the morning at the Majestic (an iconic 24-hour diner) on Ponce,” Wages adds.

He eventually sold the artists’ contracts to larger labels, went back to school for the MA, got back into marketing, opened Look-Listen, started the fashion label, and then the story comes full circle, to settle here at Thrive.  Now, we’re out of breath, but Thomas isn’t. 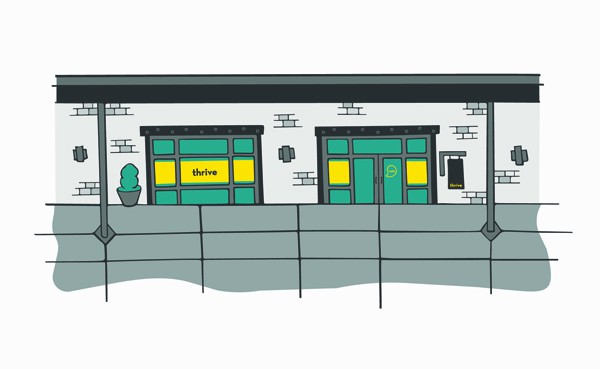 “I’ve always had huge respect for THRIVE and I’ve long been impressed with what they’re doing. The coolest thing is that when they’re doing their best job, the end user really has little awareness of it. Doing something that appears that simple is the hardest thing possible,” he says. “As COO, I want to help make their dreams come to life; I want to help them achieve some of the big goals they’ve got. And we’ve decided to let this be very iterative. There’s a lot of planning and thought, but you also just have to start moving.”

“The THRIVE team and I are just starting to walk the path together, and I’ve never felt so appreciated starting somewhere,” Wages adds. “The mutual excitement is palpable.”