Organizing for Collaborative Innovation. How to Cast the Right Team. Collaboration has always been at the core of successful design and innovation. The image of a lone inventor, tinkering away until the eureka moment strikes is mostly a myth. Mostly that is. Even some of history’s most prolific and well-known inventors, Thomas Edison for example, actually had teams of technicians working together to innovate collaboratively under his leadership. Today, invention and innovation occur in much the same way, with interdisciplinary project teams of designers and subject matter experts teaming up to create solutions and solve complex problems. Although collaboration is the vehicle for innovation, today’s design thinking methodologies largely focus on the result and view the collaborative culture formed in the wake as a favorable byproduct of the process, not the goal.

In this, part one of a three part blog (1/3), we will look at how the theatre and its complex web of collaborations and relationships between producers, choreographers, and actors show us how collaboration can have a powerful multiplier effect and deliver amazing results. We know that businesses that collaborate are 23 percent more likely to increase productivity, 24 percent more likely to increase profitability, and 48 percent more likely to offer a broader range of goods and services (1). But how can you routinize collaboration in your organization? Our research led us to Broadway, NYC, and the theatre. We found that the theater and the way it stages productions provides a blueprint structure for facilitating collaborative innovation, the environment needed to speed the process of getting from great ideas to commercialized innovations—fast. We dubbed this “Theatre Thinking.”

Design Thinking exists at the intersection of science and art and relies on the scientific method to provide objective validation as a measure of success. Similarly, Theatre Thinking is a harmonious hybrid of science and art, but as Theatre Thinking is a process that deals in emotional currency, that is inherently qualitative, it must rely on a variety of communication-based facilitation methods for ongoing validation as a measure of success. Both Design Thinking and Theatre Thinking draw upon logic, imagination, intuition, and systemic reasoning, to explore the possibilities of what could be. Theatre Thinking should not be viewed as an alternative approach, however, but as a value-add to the design process. So how does this Theatre Thinking thing work exactly? Well, the theatre is an inherently collaborative art form. Multiple contributors, namely an ensemble of actors, work together under the leadership of the director to create a show. Skilled directors are master facilitators. They work with the performers and producers to sculpt and prototype until the product is ready for the audience. And while they are always mindful of the ultimate output (the show), their focus is really on building their ensemble by accessing untapped potential in performers and then unifying the team under their vision. It’s what we call a collaborator-focused facilitation, with an emphasis on optimizing the individual so they can then contribute to making the sum of the parts greater than the whole. Why Empathy and Customer Closeness is Crucial for Design Thinking

In interviewing theatre directors and examining the collaborator-focused facilitation methods they use to improve their ensemble and enhance the overall product (the show), we identified three principles for collaborative innovation that can be leveraged to get the most from any team. Used in coordination with traditional design thinking, these facilitation methods can improve the collaborative climate for innovation within your organization — which can result in exponential improvements in the performance of team members, and yes, ultimately the output.

We’ll dive into the first principle here (check back for Principles #2 and #3 in the coming weeks):

Optimize for collaborative innovation by putting the right people in the right roles, and assemble the best team possible with the big picture in mind. Archetypes can provide a useful framework for casting strategies as they illuminate a need for balance. Casting too many of a similar type will prove to be boring or even counterproductive. It is also important that everyone understands the part that they play as it helps clarify expectations for the entire group.

Design, innovation and customer experience teams are selected to bring balance and range to a collective portfolio. This talent-based approach to strategic team creation is commonplace within both theatre and strategic design. In theatre, however, directors have the benefit of auditioning people; they can gain quick insight by watching actors try on different roles and by seeing how they interact with one another. Final casting takes into account individual capabilities as well as group dynamics. Unfortunately, in corporate life, we don’t always have the luxury of auditioning team members, but a little more in-depth understanding of your talent at hand can help you create your ideal cast. 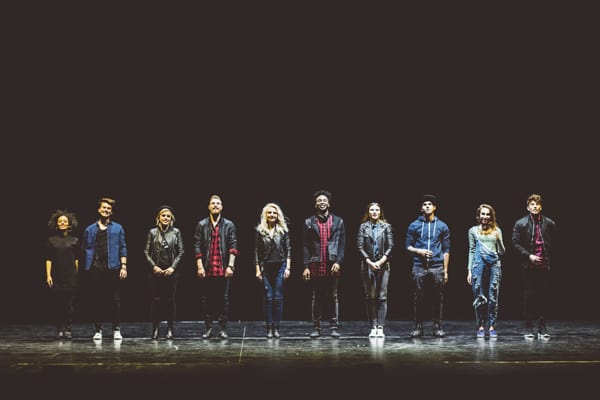 Just as a director first reads a script, formulates a vision for their production, and outlines the context of what they want to cast, a facilitator within an organization should have a vision for their project as well, and an idea of the resources needed to complete it. If you have an awareness of your talent pool and some baseline information about what they do and what they’re capable of, you too can begin to prototype what your project team might look like. Maybe one person is highly creative but lacking in a process, for example. In that case, you make sure to add a very process-driven person to the team for balance.

On top of focusing on skill sets, you can also begin to layer in personality typing and people styles. For example, in the theatre, you would not cast your entire show with leading men or women. Instead, you would know that you need one lead that stands out from the rest, and a supporting ensemble that’s not going to distract from your lead during critical scenes. (And of course, every heroic lead needs a villain, but we will talk more about that in the next post.) It’s all about keeping the big picture—your vision—in mind and crafting your team around it to build an environment that is conducive to collaborative innovation. Once you’ve assembled your team, you need to make sure everyone knows what role they play. If they don’t, there can be ambiguity or confusion about how they should perform and what they should be doing. “The majority of actors are all insecure. The majority of actors don’t want to do something wrong,” one of the directors we spoke with noted. It’s the same with people in general. Most people are motivated by a desire to be successful, and they want the security of knowing what their responsibilities are. It goes beyond just assigning a job title; they want you to hand them their script so they can memorize their lines and learn their cues. Give them a frame to play within if you want collaborative innovation to be a key operating tenet of your teams. And when they know what is expected of them, they’ll often execute above and beyond the benchmark, because if they are clear on expectations and understand how their work fits with the team’s, fear or insecurity largely evaporates. Another thing to consider is an individual’s stage in their professional development. People should continue to grow — and so should their abilities — meaning working in a supportive capacity may eventually be ready to serve in a  leadership role. The key is to avoid typecasting: If you continue to relegate a person to one role because they did such a good job, you’re going to limit their potential. Creative minds crave variety and new opportunities to acquire experience or skills.  The key is to continue to stimulate, challenge and motivate people with diversity and opportunity so they can meet their potential and become their best selves. In turn, you’ll get better work that’s produced by passion, not by rote.

LOOK BACK AFTER THE FINAL BOWS Finally, after a project is complete — when the last bow has been taken, and the product is being produced — assess how the people on your team performed and document what you observed so you could use that information to form the next team. Note, you must recognize that these findings apply to the context of that particular project; you can’t expect the same results on all types of projects, but there will be an emerging pattern within your organization that can serve as a framework for achieving collaborative innovation.

CLOSING THE CURTAIN ON CASTING There are so many unknowns in any project. But your people can be the known variable. So if you work on building up those people — putting the right grouping of collaborators together and making sure that they’re each performing at their optimal level — then you can create a very clear expectation of what you’ll expect from them. If you don’t make that investment, they too will be an unknown and will continue to be. So get to know them. Experiment with them. Take the journey with them. Build an innovative ensemble. And if you build it… they will innovate —collaboratively!