Three Things CES 2018 Told Us About Designing the Future 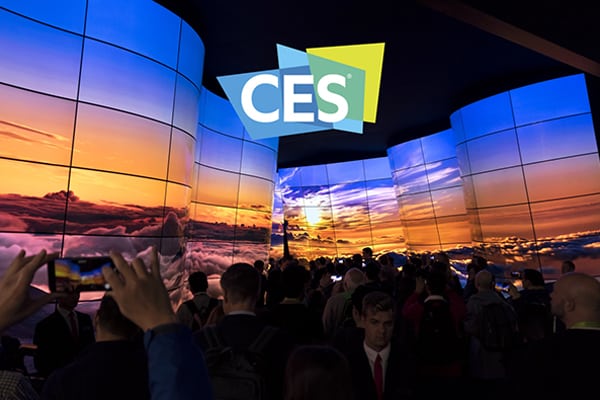 This year’s CES (which took place January 9-12 in Las Vegas) was, quite simply, a whopper. The proof is in the numbers alone. The 51st annual show featured its largest floor yet, with an exhibit space encompassing more than 2.75 million net square feet filled with more than 3,900 exhibitors. More than 900 experts spoke during somewhere around 200 conference sessions. Even social media showed its magnitude: CES reported there were 860,732 tweets about the show and 450,554 uses of its hashtag, #CES2018.

Amidst all the fanfare was an incredible showcase of the world’s newest technologies and latest innovations from brands across the industry. And while the numbers from the event are impressive, what matters more is what the tech shown at CES reveals to us about designing the future. Heads up: that world of tomorrow keeps inching closer.

Keep reading for three trends from this year’s show that hint at what’s coming next.

1. The Internet of Ears

CES 2017 was rightly dubbed the “Year of the Voice” by many, and CES 2018 continued that trend, with Google dominating the category at this year’s event. Traditionally Google has not been a public presence at CES, but this year was very different. It was impossible to go anywhere in Las Vegas without seeing a Google ad flashing at you from a billboard. Apparently not content with a booth on the showroom floor, Google erected a resplendent three-story white building in the very front of the Las Vegas Convention Center complete with a blue corkscrew slide for a fast exit. But despite the outsized effort, all of this felt like a company playing catch-up and heavily promoting home control via the Assistant; nothing we haven’t already seen from Amazon’s Alexa. Alexa was there, too, but largely through the omnipresent “Alexa Enabled” tagline seen across many a booth on the show floor.

As for designing the future, like it or not, it’s going to be impossible to escape the so-called Internet of Ears. What started as the concept of a connected home is now rapidly evolving into that of a connected world. And post-CES 2018, the battle lines have been drawn between Google and Amazon. Anyone else will be left in their wake (and yes, that means Apple too), but who will prevail? The answer seems to lie in the hands of some of the world’s other top brands. Each must choose which tech is the right tech for them, and this will come down to the ecosystem of products and services each platform enables. Last summer, for example, Walmart announced it was teaming up with Google Assistant to enable voice shopping on all Google devices. Soon after, Target announced the same. Meanwhile, Toyota launched an e-commerce mobility platform, teaming up with Amazon, Pizza Hut, Uber and others to form the “e-Palette Alliance,” and offer delivery services via driverless concept cars.

We predict it will take at least a year to see where all the chips fall. Amazon has an installed base of roughly 4,000 products whereas Google only has 1,500, but one advantage for Google is its presence on smartphones. Android’s operating system was developed by Google, which gives Android users an incentive to adopt Google Assistant, and then, of course, there’s the Google Pixel, first released in 2016. Maybe the bigger question is, will we see Amazon enter the smartphone market as well? 2. The Promise of Anticipatory Automobiles

CES, without doubt, has cemented itself as a premiere showcase for automotive tech and it’s becoming more of an auto show with every passing year. What’s propelling the potential of the CES auto show is the trend that started taking shape last year: mood enhancement behind the wheel. “Anticipatory” has become the keyword in consumer electronics, perhaps even more so it seems in the automotive world right now. Why? Well, it turns out emotions are “big data” too, and automobiles are the perfect controlled environment in which to sense and respond to our flurries of sentiment (good and bad). You might recall the Hyundai concept car from CES 2017. The motor company partnered with design firm IDEO to create a car with sensors that tracked driver posture, heart rate and eye movement, the premise being that if a driver starts to nod off, the vehicle can sense this and alert them with a burst of cold air and brighter lights.

This year, Nissan followed the trend with its brain-to-vehicle system. The “B2V” technology measures and interprets driver’s brain-wave activity using a wearable device, anticipating driver movements and transmitting the information to a car’s steering, acceleration and braking systems. The vehicle might then automatically start to turn the wheel or accelerate, for example, 0.2 to 0.5 seconds sooner than the driver would. Its goal: to improve reaction times and enhance manual driving.

It’s interesting to see automotive manufacturers leading the way with the anticipatory trend rather than the much celebrated ‘smart home,’ but this likely ties to the fact that a car provides a more controllable environment, with touchpoints for collecting data and responding in proximity to the driver. What we saw in automobiles at CES 2018 will likely be the lighthouse for the way our homes will behave in the future. 3. The Evolution of Health Monitoring

If CES 2018 told us anything, it confirmed the blurring of lines between healthcare and the consumer market with everything touting some kind of health benefit, from connected cars to nutraceuticals. Moreover, we know the definition of healthcare is changing, expanding to include a broader perspective of health and encompassing aspects of general wellness in addition to mental health. This shift has also laid the foundations for healthcare to move from more traditional environments to where we live, work and play.

What does this signal for the future of technology in helping to improve overall medical outcomes? Well, for one thing, CES 2018 proved that when designing the future we’ve certainly moved past fitness trackers and smartwatches as the definition of digital health innovation; the newest devices offered are geared towards consumers taking health monitoring into their own hands. But this year showed a continued progression from solely monitoring to influencing behavior change. Len Greer, president of Johnson & Johnson Health and Wellness Solutions, said it best during the Digital Health Summit at CES: “The reality is, a tracker is telling me that I haven’t taken enough steps. None of those things are news to me. What would be helpful is to remind me that doing those things correctly will help me achieve what I want.” One of J&J’s solutions comes in the form of its Health Partner platform, which uses connected digital health tools help patients better prepare for surgery and recovery based on behaviors and underlying motivations to become and stay healthy. This shows where the future of healthcare lies: personalization. We are starting to see wearables being personalized to an individual’s condition. After all, a personally engaged patient has the highest potential for a successful healthcare journey.

So, if we look into our crystal ball, what do we see? That the global tech industry is only growing and getting ever more vibrant. There’s another number to note from this year’s CES that’s worth mentioning: 900 startups participated. Today and tomorrow, it won’t just be major international brands innovating in the space; alongside budding personalization and humanization of tech lies another trend – egalitarianism. Today, anyone with an idea and the motivation to bring it to market can tap into these trends and help design the future and shape tomorrow.